A theme park in England is offering a family a chance to get paid to try its rides.

The dream job, for some at least, is available at Drayton Manor Resort in Staffordshire, which is hiring an exciting family to ‘live like a Viking’ for a day, for cash.

The park is offering £500 to the lucky family to celebrate the launch of its brand new Viking area.

Contestants get the chance to try a variety of new rides and attractions, all inspired by ancient gods and legends.

These include the spinning Disk’O coaster, Thor and Loki, the first of its kind in the UK.

The highly anticipated ride will take thrill-seekers to new heights, with Drayton Manor’s official website promising that the ride will offer “a truly hypnotic experience from both the sky and the ground”. 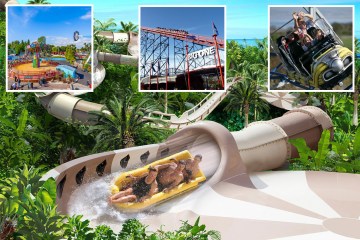 A viral clip of the ride in action has already amassed over 1.1 million views after it was uploaded to Drayton Manor’s social accounts last week.

The newly appointed Vikings will also be offered grilled food from the new Walhalla restaurant, a restaurant inspired by the historical sky that warriors are meant to visit after battle.

They then spend the night in the resort’s new Viking-themed rooms at the on-site 4-star hotel, which feature traditional wood paneling adorned with shields and paintings of ancient seafaring.

They receive a full English breakfast the next day before regaining access to the park as part of the resort’s Stay & Play package.

In exchange for the trip and money, the selected family simply needs to review their Viking experience and report back to the resort bosses on the fun factor, excitement and general entertainment value.

Victoria Lynn, Managing Director of Drayton Manor Resort said: “We are looking for a family who loves nothing more than a fun day out and new experiences to come and try Vikings for themselves.

To stand a chance of becoming the lucky family chosen to ‘live like a viking’, applicants should submit their application before Friday 29th July to www.draytonmanor.co.uk/vikings/viking-for-a -day-competition and explain in 100 words or less why you think you would be perfect for the role.

Drayton Manor was recently named in the top 20 theme parks in the world.

Best of Britain – ranked higher than Disneyland Paris in European awards – is one you’ve probably never heard of.