AP – The family of an Israeli-American girl killed in a 2001 Palestinian suicide bombing in Jerusalem is seeking a meeting with US President Joe Biden in hopes of forcing Jordan to extradite a woman convicted of orchestrating the deadly attack .

Malki Roth’s parents reached out to Biden on Sunday, asking to meet with the president when he comes to Jerusalem this week. They want the President to put pressure on Jordan, a close American ally, to send Ahlam Tamimi to the US for trial.

“We are bereaved parents like you, sir. We have a burning feeling that injustice will prevail after the murder of our child,” write Frimet and Arnold Roth in their letter. “We ask that you address this as only the leader of the United States can.”

The Roths have campaigned for Ahlam Tamimi’s extradition since she was released by Israel in a 2011 prisoner swap with Hamas. As part of this deal, Tamimi was sent to her native Jordan, where she lives freely and is a familiar face in the media. The Jordanian authorities have rejected calls for their extradition.

On August 9, 2001, a Palestinian bomber went into a Jerusalem pizzeria and blew itself up, killing 15 people. Two American citizens were also among the dead, including 15-year-old Malki Roth.

Tamimi, who selected the target and guided the bomber there, was arrested weeks later and sentenced by Israel to 16 life terms. 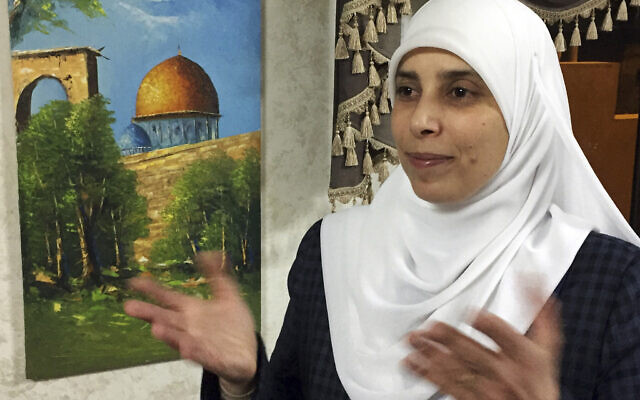 In this photo taken on March 21, 2017, Ahlam al-Tamimi is photographed during an interview at her home in the Jordanian capital, Amman. (AP Photo/Omar Akour)

Since her release, she has shown no remorse, even boasting that she is pleased at the high death toll.

In a 2017 interview with The Associated Press, she said the Palestinians have the right to resist Israel by any means, including deadly attacks. 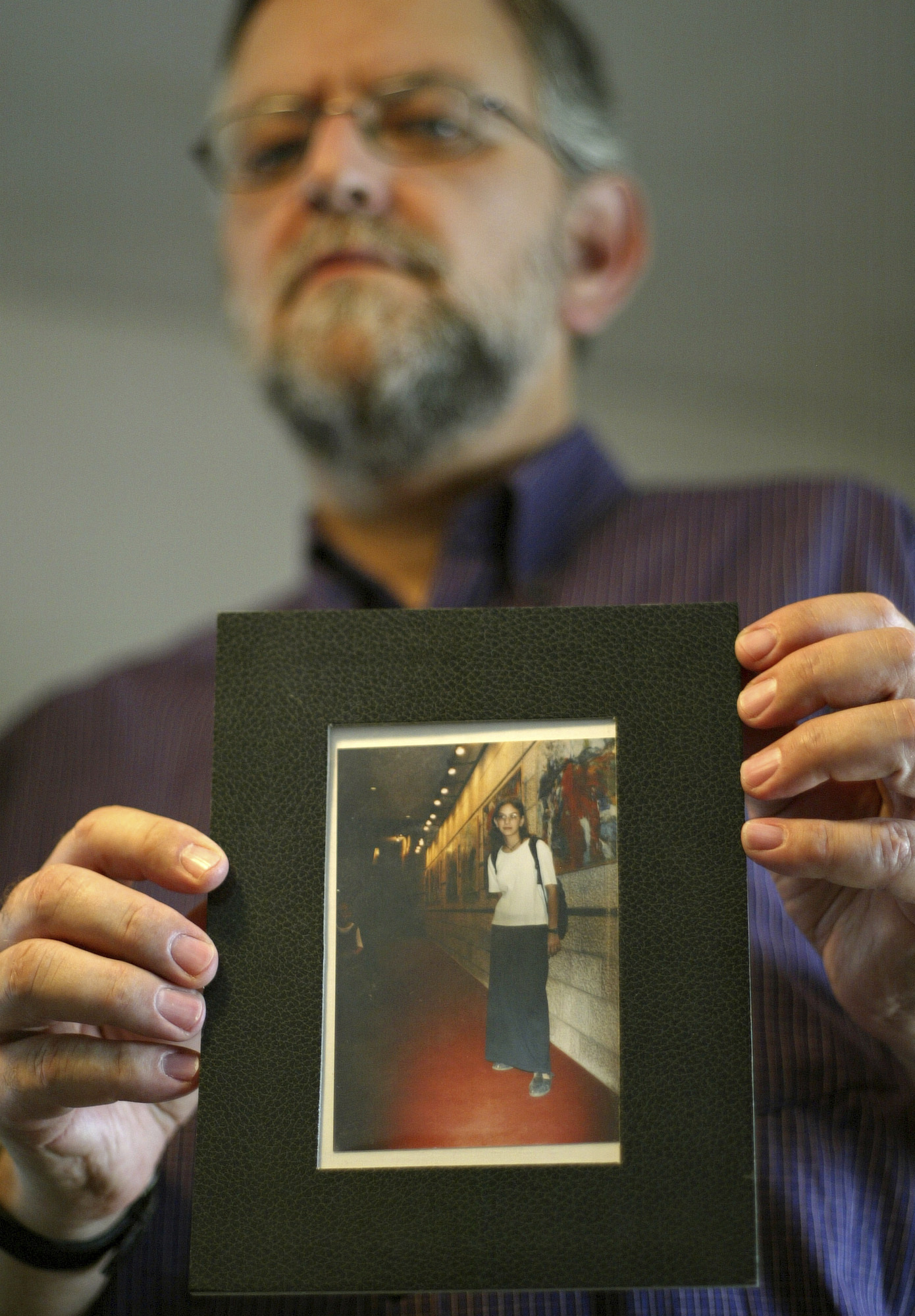 Arnold Roth holds a photo of his 15-year-old daughter Malki, who was killed September 28, 2004 at his home in Jerusalem in a Palestinian suicide bombing at a Jerusalem pizzeria. (AP Photo/Oded Balilty)

The Roths have repeatedly urged US authorities to urge Jordan, which has received billions of dollars in American aid, to bring Tamimi to justice.

The United States has accused Tamimi of conspiring to use a weapon of mass destruction against American nationals. The indictment was filed in sealed form in 2013 and announced by the Justice Department four years later. Her name was added to the FBI’s Most Wanted Terrorist List.

The United States and Jordan signed an extradition treaty in 1995. But in 2017, Jordan’s top court blocked their extradition, allegedly claiming the deal was never ratified.

Two years ago, the Trump administration said it was considering withholding aid to Jordan over the case, but ultimately no action was taken.

Jordan is one of the United States’ closest partners in the Arab world and is seen as a force for moderation and stability in the unstable Middle East. American officials appear wary of triggering a diplomatic crisis with a key ally.

“Something is obviously terribly wrong with the way the pursuit of America’s most wanted female fugitive is going,” the Roths wrote in their letter, sent to Biden through the US Embassy.

“We want to explain this to you better in a personal conversation,” they added. “We want you to look us in the eye, Mr. President, and tell us how Jordan’s king can be a commendable ally.” 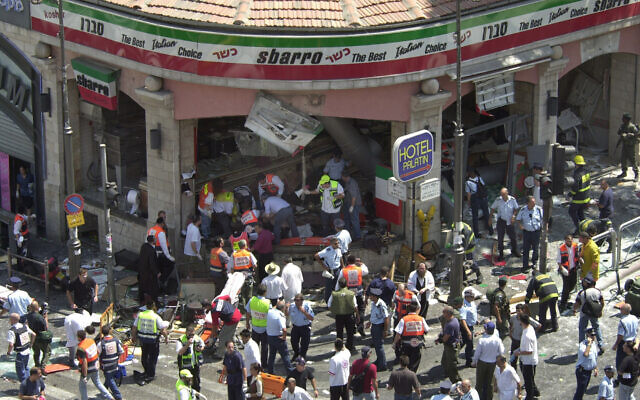 Police and paramedics surround the scene of a bomb blast at a restaurant in downtown Jerusalem, August 9, 2001. (AP Photo/Peter Dejong)

Biden is scheduled to land in Israel on Wednesday before traveling to a Middle East summit in Saudi Arabia on Friday. He does not plan to be in Jordan, although Jordanian officials are expected at the summit.

There was no immediate comment from either the White House or the Jordanian Royal Hashemite Court.

The Roths’ letter was sent days after the family of a Palestinian-American journalist who was killed while covering an IDF raid in Jenin slammed Biden over his administration’s response to her death.

Relatives of Al Jazeera reporter Shireen Abu Akleh expressed “sadness, outrage and [a] Feeling of betrayal” in a letter accusing the US of trying to efface Israeli responsibility for her death.

A US investigation concluded that Abu Akleh was likely killed by Israeli fire, but that the bullet was too damaged to draw a definitive conclusion and that there “is no reason to believe” that they deliberately attacked became. Israel says Abu Akleh was killed during a gun battle with Palestinian gunmen and it is unclear who fired the fatal shot. The Palestinians say Israel killed them on purpose.

See also: Failed by Israel, Malki Roth’s parents hope the US can extradite their malicious killer

The White House declined to comment on the Roths’ letter or the family’s request to meet during his visit.

In March, Interpol dropped an international arrest warrant for Tamimi.

Times of Israel staff contributed to this report.

You are an engaged reader

We are very pleased that you have read X Times of Israel article Last month.

That’s why we launched the Times of Israel ten years ago, to provide discerning readers like you with essential coverage of Israel and the Jewish world.

So now we have a request. Unlike other news agencies, we have not set up a paywall. However, as the journalism we do is expensive, we invite readers who have found The Times of Israel important to support our work by joining The Times of Israel Community.

Many Thanks,
David Horovitz, founding editor of the Times of Israel