The ONEXPLAYER Mini is a handheld gaming computer with a 7″ display, integrated game controllers and Windows software to run many PC games. Originally launched earlier this year as a smaller alternative to the 8.4-inch ONEXPLAYER line of handhelds, One Netbook has quickly expanded the lineup to include additional models with different processors.

The latest that ships worldwide is the new ONEXPLAYER Mini AMD Edition with a Ryen 7 5800U processor and Radeon Vega 8 integrated graphics. After launching in China last month, it’s now available for pre-order worldwide for $999+ (representing a discount off the retail price of $1259) and is scheduled to ship on April 20, 2022. 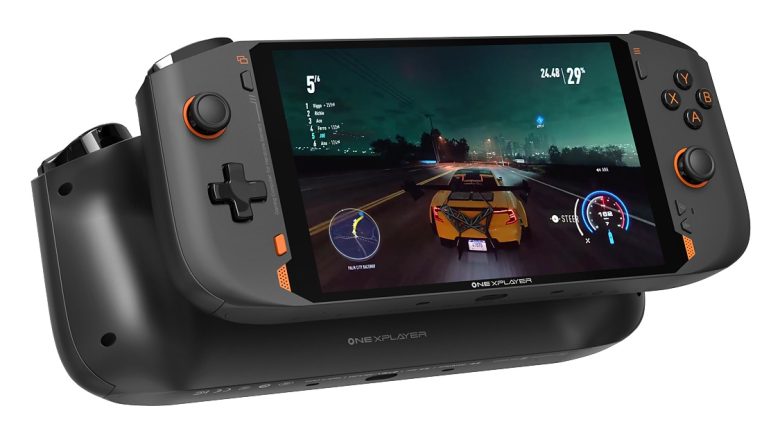 Other features include WiFi 6 and Bluetooth 5.0 support, USB Type-C and Type-A ports, a headset jack, and a 12,600mAh battery and 65W fast charger.

But what sets this little computer apart from a notebook or tablet are the built-in game controllers, including dual analog sticks with ALPS rockers, shoulder buttons with touch-click bumpers and linear analog triggers, a D-Pad, and Xbox-style action buttons . There is also a gyroscope for motion control.

While the ONEXPLAYER itself doesn’t have a physical keyboard, One Netbook offers a foldable Bluetooth keyboard as an optional add-on for people willing to shell out $59 extra. There’s also an optional suitcase that costs another $29.

As for pricing… it’s complicated. One netbook says retail prices will range from $1259 for a model with 512GB of storage to $1499 for a 2TB version of the little computer. But folks who pre-order can save up to 21 percent depending on the model they choose and on the day you place your order:

Incidentally, the sales prices are identical to those that One Netbook charges for an Intel-powered version of the ONEXPLAYER Mini. This model shares a similar design but is powered by an Intel Core i7-1195G7 processor and packs a 10,455mAh battery and 100W fast charger. It’s also slightly lighter at 587 grams (1.29 pounds).

But there’s a new model on the way that features a 12th Gen Intel Core i7-1260P Alder Lake processor. International pricing for this version has not yet been announced, but it will cost around $1,255 and up in China.

The elephant in the room is, of course, Valve’s Steam deck. While this device has a larger, heavier design, ships with a custom Linux-based operating system, and has a less powerful CPU, the Steam Deck has more powerful graphics and a much lower price tag — it costs $399 to $649 depending on build.

The ONEXPLAYER Mini has a lot to offer. One Netbook’s handhelds come with Windows preinstalled, so you don’t have to pay extra for a Windows license or wait for Valve to perfect their Windows drivers. Systems are available with more storage for people who don’t want to upgrade on their own. And, perhaps most importantly, the ONEXPLAYER Mini AMD Edition is expected to ship to customers in a couple of weeks while Valve’s Steam Deck is in short supply – order today and your Steam Deck will most likely not arrive until October or later.

But the handheld PC space looks very different with Valve than it did when companies like One Netbook, GPD, and AYA started playing in this space a few years ago…especially since Valve is the only one of those companies that offers serious customer service and Support for its products after purchase.

Liliputing’s main sources of income are advertising and affiliate links (if you click the “Shop” button at the top of the page and buy something on Amazon, for example, we get a small commission).

But there are several ways you can support the site directly, even if you use an ad blocker* and hate online shopping.

Contribute to our Patreon campaign

* If you are If you’re using an ad blocker like uBlock Origin and are seeing a pop-up message at the bottom of your screen, we have a guide that can help you turn it off.