The European Central Bank is looking at ways to prevent banks from raking in billions of euros in extra profit from the ultra-cheap lending program launched during the pandemic once it begins raising rates later this month.

The ECB’s €2.2 trillion in subsidized loans to banks helped avert a credit crunch as the Covid-19 crisis hit. But with the central bank now planning to hike rates, it will provide eurozone lenders with a bonanza of up to €24 billion in additional income, analysts say.

The Governing Council is set to discuss how it could dampen the extra margin hundreds of banks can earn on their subsidized loans by simply depositing it back with the central bank, according to three people familiar with the plans.

People said it would be politically unacceptable for the ECB to give banks a taxpayer-covered profit while it raises the cost of borrowing for households and businesses and most commercial lenders pay bonuses to employees and pay dividends to investors.

The ECB has announced it will raise its deposit rate to minus 0.25 percent at its July 21 meeting, while signaling a larger hike is likely to take the rate above zero in September for the first time in a decade, followed by further hikes if the inflation remains high.

One option could be for the ECB to change the terms of the loans to reduce the chance for banks of an automatic return on money, just as it made them more attractive after the pandemic started in 2020.

The ECB defended its cheap lending to banks, saying: “Without them, the pandemic would have hit the real economy much harder.” It declined to comment on how it could prevent lenders from making windfall profits.

Morgan Stanley estimated that banks could reap between €4 billion and €24 billion in additional profits by investing the ECB’s cheap loans from last month until the end of the program in December 2024 with the central bank, depending in part on how quickly the Interest rates will rise in the future months.

A person briefed on the matter said the ECB estimates the total profit available to banks at almost half of Morgan Stanley’s maximum estimate. More than 740 banks applied for the loans at their peak in June 2020 when €1.3 trillion was distributed, but the total number of participants in the program is not publicly available.

The ECB started offering the loans – known as targeted longer-term refinancing operations (TLTRO) – in September 2019. They were initially available at the ECB’s deposit rate of minus 0.5 percent. But after the pandemic hit, the ECB cut interest rates to minus 1 percent, paying banks even more to borrow unless they let their loan books shrink.

The ECB brought the TLTRO rate back to its deposit rate last month. Crucially, however, the interest rate on the loans is calculated as an average over their three-year term. Banks can repay the money early every three months. Prepayments of €74 billion were made last month, far less than expected, reflecting the increasing appeal of the program as interest rates rise.

“Some banks double-checked their profit calculations with the ECB and then abandoned the idea of ​​early repayment,” an official said.

Fabio Iannò, senior credit officer at Moody’s, said: “We expect European banks to hold on to their TLTROs for as long as possible because it’s just free money.” finance loans, but would be deposited with the central bank. 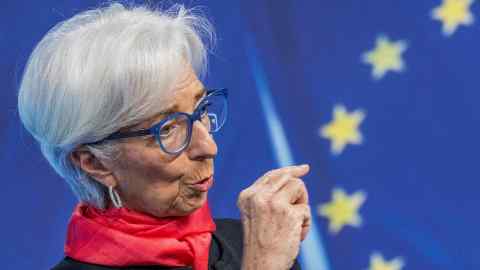 Morgan Stanley has calculated that if the ECB raises its deposit rate to 0.75 percent by the end of this year, a bank that took out a TLTRO loan in June 2020 could earn a 0.6 percent profit margin on the money it is due to be repaid June 2023.

“This trade has been quite profitable for us,” said the chief financial officer of a European bank. “It’s been difficult for banks to shout about it – you don’t want to say that as a bank you’ve benefited from the pandemic.”

While the ECB does not dissect banks’ data, French lenders were the biggest users of the cheap liquidity with exposure of almost €500bn in April, followed by their peers in Italy and Germany.

Last year, Germans’ interest income was boosted by EUR 494 million, or 15 percent of their pre-tax profit, thanks to subsidized ECB liquidity. The German, who counts TLTROs as a “government grant” in her accounts, declined to say how much was deposited with the ECB.

One person familiar with the bank’s decision-making said, “A carry trade for cash was not the purpose of Deutsche Bank’s TLTRO participation.”